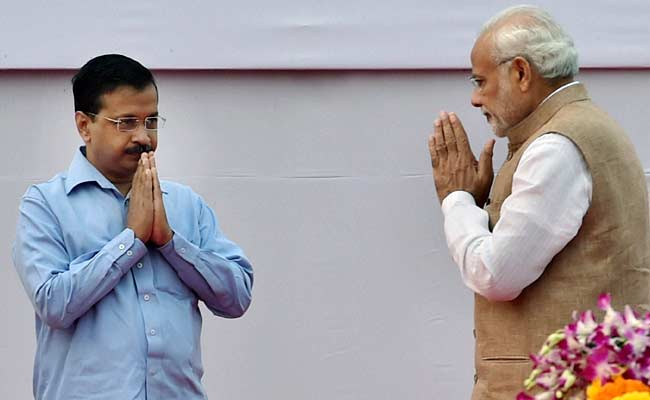 In politics, there are two ways to impress the people you govern. Words and Actions. Ideally one would expect words to be a short term ploy and actions to be instrumental in creating long lasting impression. Empty vessels are known for making more noise. Actions are assumed to be louder than words. Sometimes, it works out like that. Often it doesn’t. More so, in the times when social media shapes national opinions. Surprising as it sounds even in the case of nations like India where population active on social media is negligible compared to the total population.

In the spring of 2014, if my memory isn’t failing me, I met Dr Gayatri C Spivak at a seminar at Columbia University. During a group discussion, I asked her why Aam Aadmi Party leader Arvind Kejriwal was doing populist things like chanting Bharat Mata Ki Jai when he was supposed to lift political conversation above any rhetoric. ( I’ll leave the discussion on Bharat Mata ki Jai for another conversation. )

What she replied  shaped my way of looking at political words. She explained that he was up against Modi! The amount of resources that BJP had, including Modi’s brand was exorbitant. So, Kejriwal would do all that he could, hopefully in ethical limits, to fight this out.

I interpreted that in this manner. Political parties or leaders should not be taken seriously on what they say. They need to be judged on what they do. Their saying is more or less inconsequential. They do that for short term political gains to get power or to sustain power .

In the US elections last year, or even in the past, so much dirt was thrown by all, including Democrats. I witnessed same madness in Loksabha Elections in India 2014. At that time I used to wonder how would Modi and Kejriwal would ever meet in person when they have poured so much of bitterness for each other in public. Incidentally, in India, we still don’t see top political leaders debating directly. So we don’t see the nasty talk that Trump and Hillary engaged in directly with each other on national TV. Can you imagine Modi directly saying to Kejriwal – तुम मूर्ख हो। . I was aghast though when during a debate Trump so effortlessly called Hillary ‘stupid’ !

So many things that Kejriwal says like an uncontrolled stereo are to sustain a public opinion against BJP and keep it in his favor. These are the need of the hour because we live in times when just DOING good work or even SPEAKING about the good work done isn’t enough. All parties engage in trash talk, in putting allegations (false or true), in belittling other parties’ belief and in many other kinds of toxic things. Different political parties or leaders have different methods to engage in this. While Kejriwal does it himself,  Modi has a fleet of people and technology and police to do it so that his image stays clean. Around the world, general people aren’t objective enough to see through this. Yet. Simple example – imagine a teacher who gives quality education in a school in an Indian village. A simple way to bring the teacher down is spread such information in public as the teacher eats beef or he is gay or is having a love affair with an upper caste girl or any such things that are considered ‘blasphemous’.  And that might be true too. In the knowledge of such information, all the good teaching work would vaporize.

Thankfully, we haven’t gone that dirty yet in political narratives. We still try to respect private lives. But we are not far from there. If the current pace and intensity of dirt continues, we shall soon be there!

So the point I am trying to make is that when Kejriwal alleges that Modi is corrupt or when BJP says Kejriwal is a liar and takes frequent U-turn or when parties make such allegations, remarks or tweets, which by the way are golden for media, then we needn’t take these seriously. They do it to balance the amount of trash against each other. It’s unfortunate but true. Apart from competing in who does better work for public welfare, they also need to compete in who says more stupid fictitious things or dumps more trash. I must clarify that some of this trash might as well be true. But they come out in an unstructured way without any serious intention to follow through. No wonder these disappear as soon as they come. There are never follow-up actions. If AAP claims that Modi takes bribe, then apart from making #ModiTakesBribe trend, why don’t they file a complaint with Vigilance or FIR and follow-up and keep people informed about progress and ultimately take it to a conclusion? If BJP and its supporters believe Kejriwal is corrupt, then arrange to get him convicted. They even have police and CBI under their influence. Why do you think they arrested AAP MLA’s when they ultimately found nothing. They too probably knew that nothing could be found. Doesn’t hurt to book them. It would fan the public sentiment against them and keep the toxicity against AAP at the optimal level.

What should ultimately matter are the decisions and executions. The projects for public welfare or even against public welfare. Those are what everyone, including news media, should focus, discuss and debate.

Why would media not report on work carried by an MLA in his constituency? When a government decides to start a mining project and auction frequency spectrum, that needs to be discussed. When education minister in Delhi starts a new project, that needs to be reported. When union government brings out a blueprint for fighting corruption, that should be debated and discussed.

But Kejriwal living in X house or Y house or Modi wearing a shirt with his name – how consequential are those on regular people’s lives? If Modi or BJP says AAP people are Naxalite and should go back to forests, are those comments important? When Delhi CM constantly claims that BJP and INC are in cahoots, is that important when not a single conviction is happening? These things are at least not worth producing hundreds of articles and telecast five thousand debates on TV.

Of course, these are of great consequence for page views and TRPs. That’s why I often observe that in media business you end up doing what is profitable and not necessarily what is right. Sure, sometimes the right thing to do also happens to be profitable.

Now there has to be a line that should not be crossed in the crossfires of allegations and comments. Case in point is politicians and influential leaders saying things that have a potential to cause violence or rift in society. Those should be reported and reported again. General people, lacking objectivity will believe such things as well and resort to violence. Comments on religion, faith, gau raksha, and fatwa can cause serious problems to peace in society.

In short, if us people start seeing through words and filter out the noise and pay attention to only the relevant information, that can encourage politicians to engage less in trash talk because they would see that those efforts aren’t bearing fruits. We need to stop liking, retweeting and sharing irrelevant sound bytes and videos to help reduce this madness.